Heart-wrenching is a suitable descriptor for the case of drunk driving currently being covered by the major news outlets in Toronto. Three young children and their grandfather were killed by an impaired driver in 2015.  Needless to say, the parents are grief-stricken beyond belief.

The court proceedings for this case are winding down now. The lawyer in defense of his client summed him up to be a very good person who simply made a terrible choice.  But, he is not alone in his bad decision to drive under the influence. The latest figures crunched by the police tell us the number of impaired driving violations are on the increase.

In spite of public education campaigns and police spot checks there persists those who drink then drive. And, on top of that, there are those who insist on texting, shaving and make-up application while behind the wheel. These people, and there are lots of them, just don't get it. They act as if they are immune from reality. They, in fact, haven't recognized the truth about the human's humble position as a primate.

We know that distraction of or giving alcohol to a chimpanzee will impair the animal's ability to perform complex tasks. Why then would we think this principle does not apply to our own human case? We just have to look at the carnage and anguish brought about by impaired and distracted drivers to know that it certainly does.

Subscribe to my RRS feed,spread the word and share with a friend.
Posted by Sheila L. Banks at 1:52 PM 0 comments

The picture of me below is at The Bob Marley Museum in Kingston, Jamaica last February. I gave them a framed copy of the poem below.   I penned this tribute to Bob Marley a few years ago. 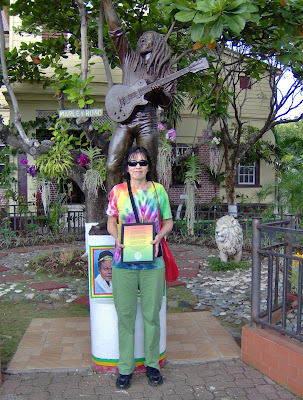 For The Love of Bob
We heard him sing songs of freedom
as he fueled the fire of a roots revival.
Marley was the Jamaican messenger
who was guided by the wisdom of the Bible.

We know he was a creative genius.
Through music, he proclaimed God's word.
Bob Marley was the musical prophet
and creator of the sweetest vibes on earth.

We listened as he spoke out for justice.
Yet, he encouraged only peaceful means.
Just thank Jah he walked among us
and healed many with his soulful beat.

Amazed at how his reggae moved all the people,
as he swayed both black and the white.
Bob Marley was the musical prophet,
a human conduit for divine love,
and Jah's light.

There's a lot more to it.
See my video Natty Dread Rise Again

Subscribe to my RRS feed,spread the word and share with a friend.
Posted by Sheila L. Banks at 1:14 PM 0 comments