Rastaman, Will I Make You A Fisher of Men?

The other day I posted, on a Bob Marley site, a link to my blog post "A Mystical Meeting". I was surprised at the resulting analytics; people from across the globe were on to it. In that post I offer an up to date justification for the Rastafarian's reverence for Haille Selassie.

Inspired by my trip to Jamaica, I blogged about the presentation I had produced there for some Rastas. These particular Rastafarians view Selassie as God just like some Christians do with Jesus. Yet, didn't both these "Gods" directly deny any claim to a divine status? I didn't push the point that day but instead, looking for common ground, I penned the poem found below.

Rastaman, Will I Make You a Fisher of Men?

Now that you know which way will you go?
Now that you have had a sip of the living water,
don't tell me that Jesus does not matter.

Your King of kings knew him too,
that Christ, liberator of me and you.
Ras Tafari, like Jesus, had utopia as the mission,
the evolution of human consciousness, that God-inspired vision.

Both Jesus and Selassie, graced with the hatching
of a Christ-mind came to emancipate.
Now then, are you going to cooperate?


There's a lot more to it.
Check out my ebook (click here)

Now Ain't That A Kick In The Pants

The latest scandal to hit the world of sport comes as no surprise to those in the know. Apparently allegations of  FIFA's racketeering have been floating around for decades. However, it is just now that the authorities have collected enough forensic evidence to indict some of the organization's top officials.

What else is new? Every other week the media reports on but another case of moral decay and corruption. Although the ancients warned us about the pitfalls of greed, you cannot deny how powerful a motivator money is for the human primate. Hell, we even have had a financial scandal in the Vatican.

But the good news is that we finally are confronting the status quo. These scandals are bringing to light just how insidious our animal ways truly are. Like a squirrel that piles up nuts, many in our species have a preoccupation with stock-piling money regardless of the impact on neighbors. But, it can't be business as usual because evolution is demanding something else from Homo sapiens.

This new millennium has us facing the converging conditions of the global village. Consequently we are at a stage in our evolution where unprecedented levels of cooperation will be required from all of us. We cannot let lust for material goods threaten our quest to become an ethical species. Without an expansion of our ability to cooperate, Homo sapiens surely will die out.

It will be interesting to see what the court proceedings reveal about FIFA. I won't be surprised if they find that it is one more example of greed gone amuck. As we learn to heed to the wake up call that this and the other scandals bring, you can count on a lot more butt-kicking to go down.

I was one of the lucky ones this year; I attended Bob Marley's 70th birthday bash in Negril, Jamaica. Also, I did my pilgrimage to Bob's gravesite and toured the museum that honors his legacy. And, in the photo below I can be seen making music with some Rastafarians in Kingston.

I had the incredible experience of presenting the paradigm shift found in my book Thoughts From A Contemplative Beast: The Paradigm Shift For The New Millennium to a group of Rastafarians. I think they were in shock by the time I departed as I also had informed them of my discovery about their king of kings, Haile Selassie.

Just last year while reading the speech Selassie gave to the United Nations on Oct. 6, 1963, I saw the following:

Here Selassie clearly is talking about our responsibility for human evolution. All the information I have sifted through in the past 18 years points to this emperor as truly having understood the evolutionary message of Jesus The Christ (as presented in my earlier blog posts). This finding certainly justifies the Rastafarian preoccupation with their Ras Tafari. Although Selassie did not perceive himself to be Christ-like and could not buy into the Rastas' idolization of him, this last emperor of Ethiopia had the same rare insights about human evolution as Jesus. It appears that the man had had a hatching of a Christ-mind but unbeknownst to him; and, I think I know why. Let me explain.

Shortly after my mystical union I was given a book entitled The Stormy Search For Self  by Stanislov Grof. Actually this turned out to be a God-send, literally, as the book had valuable information on how to negotiate spiritual awakenings. Grof in his book, states that there are two paths to spiritual realization. The first path involves a gradual emergence of spirit and the other path is that of the emergency. I had the latter which resulted in a sudden and radical shift in my brain chemistry and thus an undeniable transformation of my perception. I would imagine that with the emergence scenario, the person is afforded the opportunity to adapt slowly. As a result, he may be vaguely aware of the shift in his thinking but over time. I think this may be the case with Haile Selassie. When you look at his speeches to the League of Nations and the United Nations you can see that he truly was miles ahead of his peers in terms of insight into the real evolutionary task at hand.

The astonishing fact though, is that the first Rasta, Leonard Howell, picked out Ras Tafari as a king of kings long before the emperor made those speeches. Actually Howell utilized passages in the Old and NewTestaments of the Holy Bible to predict the arrival of Christ-consciousness for his day. At that time he had no facts about Selassie's theology and yet he rightly saw something divine in this last emperor from the line of King Solomon.

When I was in Kingston with the Rastas chanting down Babylon, I was all charged up and even more so because of this mystery about Howell.  For me, on that day there certainly was a natural mystic flowing through the air. 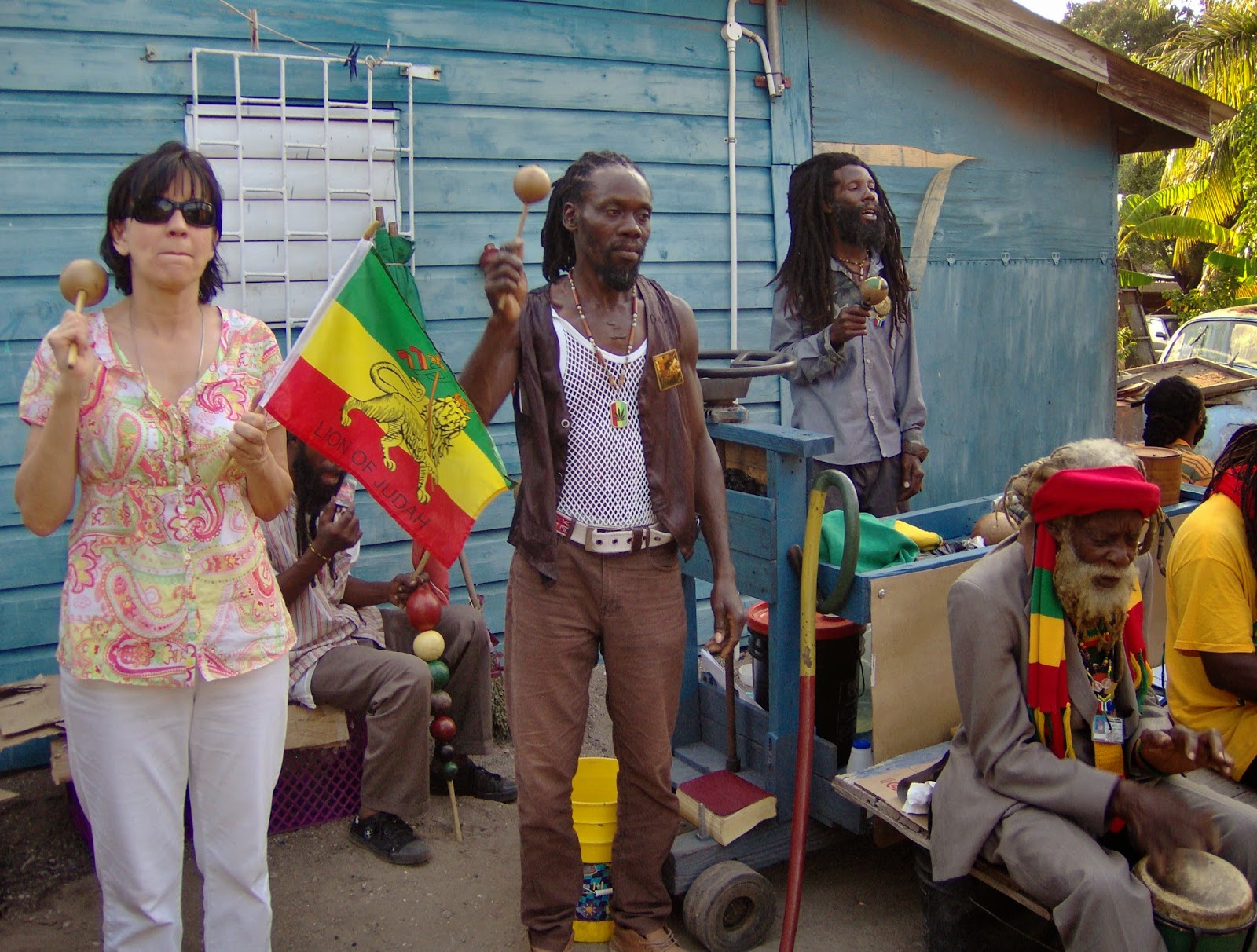 
There's more to it


Getting something out of these contemplations?
Subscribe to my RRS feed and share with a friend
Also, insightful comments are encouraged.
Email me at info@mysticbeast.com
Posted by Sheila L. Banks at 1:43 PM 0 comments

Wake Up, For Mohammed's Sake

The Lord says:
"These people come near me with their mouth and honor me with their lips,
but their hearts are far from me. Their worship of me is made up only
of rules taught by men." Isaiah 29:13
It has been said that the two men who killed unarmed Canadian soldiers had mental health problems. Does this mean that the 35,000 ISIS followers have unstable minds? What about the three young women travelling to Syria from the USA? They wanted to join ISIS but were intercepted in Germany. Are they too out of their minds?  What about the Taliban and Al Qaeda?
ISIS  and the other Islamic terrorists claim that their goal is to set up a worldwide Islamic caliphate. They actually believe that they are acting in accordance with Mohammed's vision for humanity. For certain, Mohammed was interested in promoting our collective ability to follow a moral code. However, my study of this prophet leads me to believe that he absolutely would be appalled at the actions of these terrorists.
Mohammed was interested in promoting a society where we can all get along. And, like the biblical prophets, he emphasized the individual's need to defer to the will of God in order to do so. And just like the other prophets, Mohammed's views about morality and other topics were shaped by the practices and information of his time. That is why he believed that Jesus was born of a virgin. How could he have known that our current scholarship points to something different? How could he have known that this myth was used as a propaganda ploy to lure pagans into the early Christian fold?
Mohammed viewed Jesus as a great prophet. However, he did not know about Christ's evolutionary message. How could he when that message hadn't been clearly articulated in the "bible" of his time? Even today most Christians haven't fully appreciated what Jesus had to say. It has only been since 1945 that the Nag Hamadi library was unearthed. In this collection is the Book of Thomas; here we see a Jesus truly aware of the human's need to expand conscious awareness beyond a mere animal self-centeredness. We see a Christ fully cognizant of  the impact of our primate nature upon our conscience. Yes, that same nature that causes us to kill one another in the name of Allah in spite of our Creator's decrees.

There's more to it
Check out my ebook
(click here)


Getting something out of these contemplations?


Why not subscribe to my RRS feed or share with a friend?
Also, insightful comments are encouraged. You can always email me at info@mysticbeast.com
Posted by Sheila L. Banks at 9:00 AM 0 comments