Exodus: The Evolution of God’s People

This post has been translated into an audio-visual format
See it here
And, the Lord said,  My spirit will not always strive
with man, for that he also is flesh.
Genesis 6:3
Dr. Andrew Lobaczewski, the author of Political Ponerology knew it. And, likely Moses in the Bible did too. Our species must unite around a core of conscience if we are to keep the psychopaths at bay. It is not enough to deliver the people from slavery. Setting the captives free from the Pharaoh’s grip or the New World Order’s totalitarianism is not an adequate defense against a predatory intra-species that looks human.

Who knows what Moses understood about the activation of conscience in the masses? But clearly, he wanted a harmony amongst his people centered around God’s commandments. And, in fact their unity around this code of ethics did serve as somewhat of a fortress against evil tyrants.

Today humanity faces a circumstance similar to the one in this Old Testament's Exodus story. Although not as blatant, the bondage thrust upon our species early on in our evolution continues. Now, the ruling classes exercise their parasitical predation by regulating our every move and taxing us into poverty.

Nevertheless, the human species has reached the end of an evolutionary epoch. The divine right of kings and the elitism of their puppet politicians are no longer acceptable to the masses. We cannot allow a cabal of psychopaths to continue to steer the trajectory of human history; or else, Homo sapiens sapiens goes extinct.

Comparable to the days of Moses, humanity truly is facing an intra-species enemy wanting to control our bodies and our minds. However, to keep us enslaved, these wolves in sheep's clothing need us confused about our conscience. So, for decades the West has been barraged with messages meant to baffle us about the meaning of our existence.

Richard Dawkins, Christopher Hitchens and others did their best to sway public opinion in favor of atheism. And, as if these “horsemen of the Apocalypse” weren’t enough, another form of nihilism was advanced via the New Age movement. According to the prophets of this modern manufactured religion, all is an illusion.

These gurus of the New Age discovered that material forms do not exist at the quantum level. So, they then went on to conclude that nothing really matters other than the self, manifesting what it desires. It is no wonder some estimates claim the amount of narcissism in the general population to be about 50%.

Are we not denying our responsibility to something greater than the self by ignoring the existential quality of the self? How do we deal with our responsibility for the way we treat others if our personality is merely a fabrication? By overlooking the fact that we are corporal beings, are we not handicapping our capacity for conscience?

Conscience is an internal mechanism that helps humans to discern what to do in their social environment. Shaped by our experiences and knowledge, conscience tells us what is right or wrong in our own conduct or motives. An alert conscience changes the way we see the world.

Conscience facilitates introspection which helps us to replace our egocentric mind set with a more expansive view. We get a deeper appreciation for the interrelatedness all about. With the development of our conscience, we get closer to discovering the ultimate meaning for our life.

The Bible tells us that humans have been created in the likeness and image of the Creator. Unlike the psychopaths among us we have the neurological apparatus which allows for the flowering of conscience. Our species has freewill because we have been equipped to choose between right from wrong.

We can choose to follow an ethical discipline that speaks to our status as co-creators of the human race. Or, because of selfish reasons, we can make the choice to become ensnared in the evil web of lies and destruction orchestrated by an intra-species enemy. What we decide to do as a collective will determine the fate of our species.
Right now The Almighty Creator is compelling Homo sapiens sapiens to ascend the evolutionary ladder. Like Adam and Eve in the Genesis story, our species is being obliged to consume fruit from the tree of knowledge of good and evil. If ever there was a time for humankind to recognize this truth about our organic predicament, that time is now.
Faithfully yours, 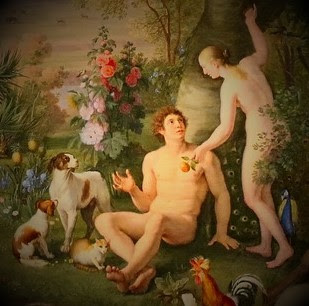 Check out my e/book click here
Insightful commentary is encouraged. Email: info@mysticbeast.com ﻿
Subscribe to my RRS feed , spread the word and share with a friend.
Posted by Sheila L. Banks at 6:22 PM 0 comments